Stranded by the Rain

Dad’s parents and sisters awoke the morning of September 7 ready to move again. Keep in mind that the nearby city of Novgorod was under siege at this time, so it must have been a horrific place to be trapped. They all needed to leave, but it must not have been easy.  They were thrust in the midst of hostilities as the Germans began destroying the city and all its historic monuments.

They left Plashkino still on foot but made little progress, according to what my Aunt Anna said in the diary entry of September 7. 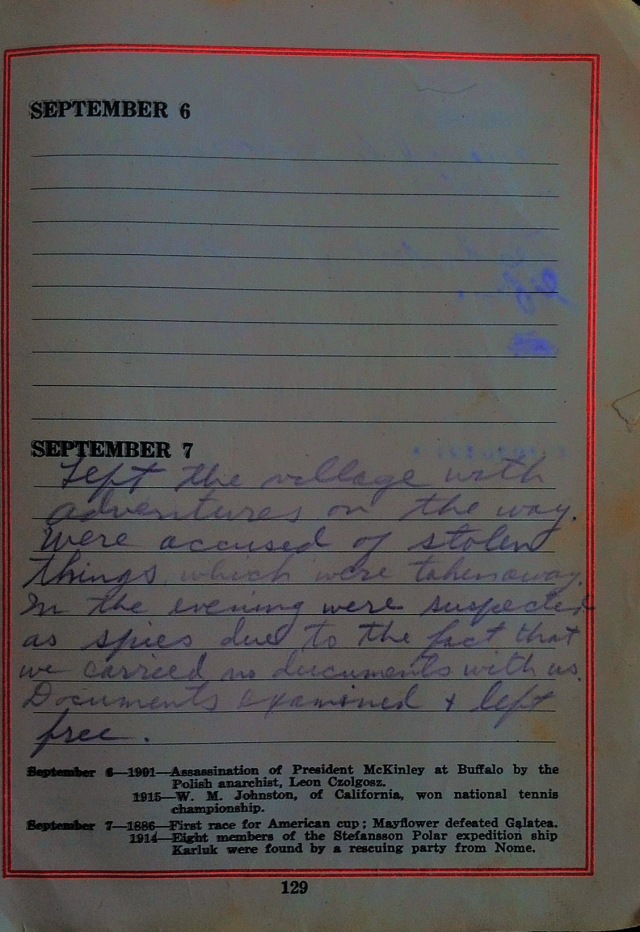 Although it sounds contradictory- “we carried no documents with us. Documents examined and left free”- my later research showed that they had no passports, but were given evacuation papers. I am guessing that the evacution papers were the documents that enabled them to leave. The lack of passports was probably not as important.

On September 8, they moved to the village of Novoselitsy barely 2 miles downstream from Plashkino. The rains were relentlessly washing out the roads and preventing anyone from moving.

Their newest shelter was only a slight improvement over the barn. From what I could ascertain from my research, the roof was probably made of straw and wood, and the walls were constructed of logs.  There were dirt floors, and since the weather was cool, most of the bugs were dead. They kept as comfortable as possible with layers of clothing and blankets but were never able to warm themselves with a fire because smoke pouring out of the chimney would have revealed their hideout to the Germans

An entry on September 19, in a different handwriting, stated that “they bombed Kiev and announced to us that war had begun. Peacetime has come to an end. It is time for us to part. I promise to be faithful to you to the end. But be careful with my feelings. The wheels of the railcars clack as the train speeds on like an arrow. I am in the rail car. You are waving to me from the platform. A year will go by. I will meet you again. We will be together and will be happy then.”

At this point, they had not reached the train, so I imagine that these words may have been the thoughts of my Aunt Nancy as she imagined being reunited with her husband, Waldemar, who was hopefully still alive with my Uncle Pete, Pete’s wife, and Waldemar’s sister Vera.  As I mentioned in Running From the War, Dad’s family had separated  in August, half traveling down the Volkov River with most of their possessions and the others moving on foot.

In any case, my grandparents and aunts were forced to remain in Novoselitsy until November, when the rains finally stopped and the cold weather set in, causing the muddy roads to freeze and finally become passable again.

I am a genealogy detective. I have already written one book about my Irish family's journey from 19th century Ireland to the United States- a family history sprinkled with personal anecdotes. My second book was intended to be a similar story about my Russian ancestors. Instead, it turned into a tale of just my father's immediate family. It is the tale of what happens when 6 children from New Jersey are moved to the Soviet Union by their Russian-born parents during the Great Depression. It details who lives, who dies, and who is able to return to NJ during a time when leaving the USSR was not an easy endeavor, particularly during World War II and the Cold War. It is my hope that those interested in history during this time period will find this story fascinating as well as those fellow amateur family historians who will learn some of the tools such as ancestry.com, visits to the National Archives, and local libraries I used to uncover this story.
View all posts by kjw616 →
This entry was posted in The Diary, World War II and tagged Americans in Soviet Union, Genealogy, Novgorod, Soviet Union, Winter War, World War II. Bookmark the permalink.

2 Responses to Stranded by the Rain