Cold and Homeless in Kuibyshev

I stumbled upon a wonderful book, “Only the Stars are Neutral”, written by Quentin Reynolds, a New York-born journalist who spent time in Kuibyshev during World War II. While in Kuibyshev, he resided at the Grand Hotel, which is where Dad’s three sisters stayed for a while. Mr. Reynold’s writings gave a first-hand account of both the hotel and conditions in the city which helped me understand what it must have been like for my family during that time.

There were only two hotels in the city: The National, which was for Russians only, and the Grand, where all the ambassadors, news correspondents, high-ranking Soviet officials, and some refugees, such as my aunts were permitted to stay. The Grand had no heat or bathtubs, but I suppose after months of living in unheated huts and trains, residing in a building with private sleeping quarters and a dining room was an improvement.

Unfortunately, my grandparents were not allowed to stay with their daughters. Instead, they stayed at the train station where only women and the elderly were allowed inside. Most likely, my grandparents were subsisting on little more than soup and bread, which they obtained after standing on long lines for hours during that bitter sub-zero winter.  Yet according to Mr. Reynolds, despite the misery experienced by all these poor refugees, they were all unified in their determination that their country would not be defeated by Germany.

The embassy request for living quarters for my aunts was denied by the Soviets, who answered by pointing out that no space was available. Although this was upsetting news for my aunts, this was not surprising to me. Why should they have provided shelter to citizens of the United States when their own were suffering and displaced? 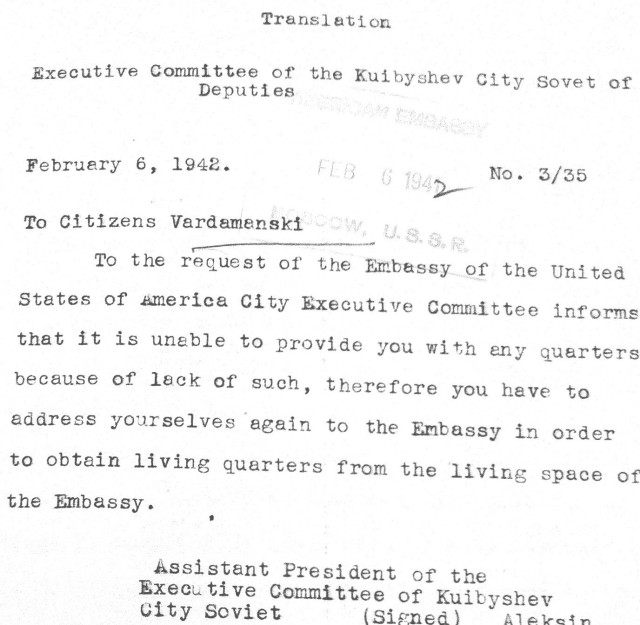 I am a genealogy detective. I have already written one book about my Irish family's journey from 19th century Ireland to the United States- a family history sprinkled with personal anecdotes. My second book was intended to be a similar story about my Russian ancestors. Instead, it turned into a tale of just my father's immediate family. It is the tale of what happens when 6 children from New Jersey are moved to the Soviet Union by their Russian-born parents during the Great Depression. It details who lives, who dies, and who is able to return to NJ during a time when leaving the USSR was not an easy endeavor, particularly during World War II and the Cold War. It is my hope that those interested in history during this time period will find this story fascinating as well as those fellow amateur family historians who will learn some of the tools such as ancestry.com, visits to the National Archives, and local libraries I used to uncover this story.
View all posts by kjw616 →
This entry was posted in World War II and tagged Americans in Soviet Union, Genealogy Research, Kuibyshev, World War II. Bookmark the permalink.