I went to my thesaurus trying to find an adequate word to describe the difficulty of writing a book, but I then realized I don’t need a pretentious, five-star word that would impress one of my former English teachers. What’s wrong with just saying that it has been really, really hard? So many times over the past few years when I realized that I was writing more than a letter to my children, I wanted to quit. But each time I wanted to throw in the towel, I thought of my father and his family and knew I had to continue.

Dad’s disappointment when I told him I wanted to drop out of college inspired me to continue. Next, I recalled the many letters I found in a misfiled box at the National Archives—letters of desperation written over a period of many years—and concluded that writing a book paled in comparison to the difficulty of being a war-time refugee.

My grandparents were sixty-four and fifty-six years old, and my aunt was pregnant, when they suddenly found themselves forced to evacuate their home on foot just hours before the city they were living in came under attack by German forces. They spent five months living in barns, abandoned houses, and train stations fighting a ferociously-cold and snowy winter—the coldest European winter of the Twentieth Century. They traveled nearly sixteen hundred miles.

None of them surrendered to the conditions that faced them, so how could I? As I sat at my computer in my comfortable house, which was heated by the push of a button during the winter and cooled during my scorching southern summers, I often contemplated abandoning the idea of completing my book. Then I thought of letters such as this memo written by someone at the American Embassy in January 1942 and realized I was a coward. How could I quit? This is what motivated me to complete my book, Do Svidanya Dad- Tracing the Story of an American Family Trapped in the USSR 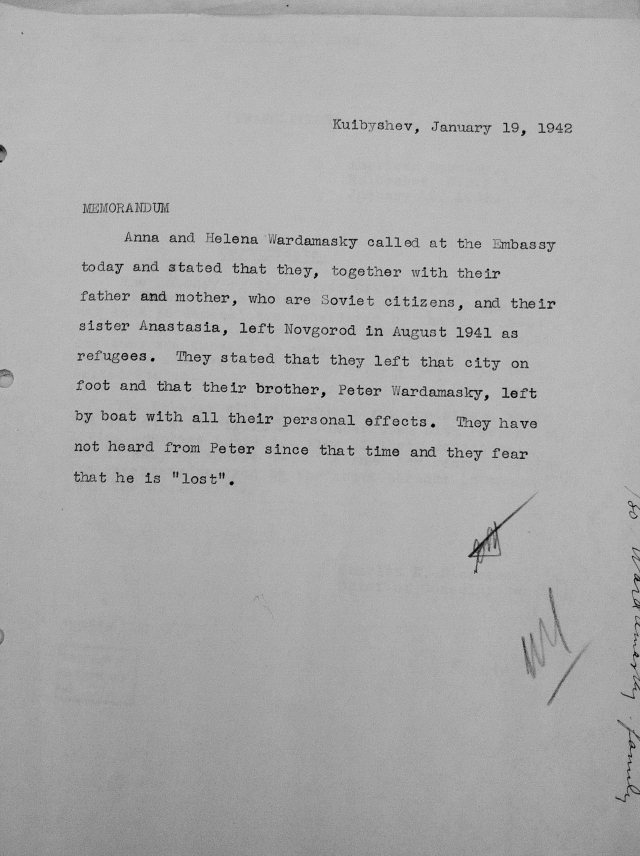 I am a genealogy detective. I have already written one book about my Irish family's journey from 19th century Ireland to the United States- a family history sprinkled with personal anecdotes. My second book was intended to be a similar story about my Russian ancestors. Instead, it turned into a tale of just my father's immediate family. It is the tale of what happens when 6 children from New Jersey are moved to the Soviet Union by their Russian-born parents during the Great Depression. It details who lives, who dies, and who is able to return to NJ during a time when leaving the USSR was not an easy endeavor, particularly during World War II and the Cold War. It is my hope that those interested in history during this time period will find this story fascinating as well as those fellow amateur family historians who will learn some of the tools such as ancestry.com, visits to the National Archives, and local libraries I used to uncover this story.
View all posts by kjw616 →
This entry was posted in My Book and tagged Motivation, Soviet Union, World War II, Writing. Bookmark the permalink.