I Had to Pick Up the Phone

I did something this week, and after the tasks were completed, I thought to myself, “You did this because of Dad.” I even spoke to my mother and told her that I did something that reminded me of him.

What I did I don’t think my father ever would have done because it was politically-oriented, and Dad had said that his father had told him to never join anything. My grandfather was particularly fearful of being associated with any political parties, so that is why I believe what I did was an action which my father would have avoided as well.

However, since Dad loved to pick up the phone, and Mom pointed out that he especially loved controversy, I think that it is because of his blood coursing through my veins that I made two telephone calls earlier this week.

I made a call to the offices of my Senator and Congressman who are up for reelection this year. Like my father, I never considered myself to be affiliated with any political party. I admit I never understood all the specific differences between them. I just voted for the candidate whose beliefs aligned with my own at the time—Democratic some years and Republican others. Dad’s reasons, however, were rooted in his years living in the Soviet Union, where he had to fear being thrown in jail—or worse—for speaking against the Soviet leader, Joseph Stalin.

Now I have the time, and as the world knows, this is not a typical election, so because of my genes, I picked up the telephone. I needed to know if my representatives had changed their endorsements of our orange-faced presidential candidate, and I explained to the person on the phone that my vote was contingent on their answer. Apparently I was not the only one asking the question, I was told by the young man on the other end of the line of the Congressional candidate.

My question was answered, but I still felt the need to explain why—hoping there was a slim chance that my reasons mattered. So now, because I may be out of town on Election Day, I have cast my vote. Not voting has never been an option to me. Thank goodness I live in a country where this is my right, and thank goodness I don’t have to worry about being imprisoned for disagreeing with my president—I hope! 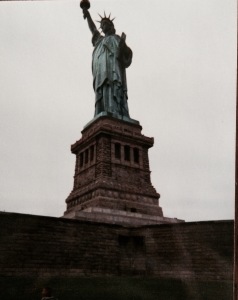 I am a genealogy detective. I have already written one book about my Irish family's journey from 19th century Ireland to the United States- a family history sprinkled with personal anecdotes. My second book was intended to be a similar story about my Russian ancestors. Instead, it turned into a tale of just my father's immediate family. It is the tale of what happens when 6 children from New Jersey are moved to the Soviet Union by their Russian-born parents during the Great Depression. It details who lives, who dies, and who is able to return to NJ during a time when leaving the USSR was not an easy endeavor, particularly during World War II and the Cold War. It is my hope that those interested in history during this time period will find this story fascinating as well as those fellow amateur family historians who will learn some of the tools such as ancestry.com, visits to the National Archives, and local libraries I used to uncover this story.
View all posts by kjw616 →
This entry was posted in Dad, Politics and tagged Presidential Election, Stalin. Bookmark the permalink.