Once upon a time, you could go to the airport and say your hellos or goodbyes to your loved ones at the gate. And once upon a time, you would settle yourself into your relatively comfy seats and be given a choice of meals—the chicken, beef, or maybe a pasta dish—all served with accompanying silverware.

We know that has changed, so much so that I was actually surprised when offered a tasty, crunchy little biscotti for breakfast on my one-hour flight to Washington D.C. recently (sorry, no coffee or tea). I remember when we would be offered eggs, pancakes, fruit, or perhaps some kind of breakfast pastries—all at no additional cost. So it was with great amusement that I found an article in one of my father’s old newspapers. It was from the New Jersey Star Ledger on August 11, 1974, which Dad had saved because it covered the news of our new president, Gerald Ford, who had just been sworn in after the resignation of President Nixon.

If you are old enough to have been a passenger on an airline in the early days of commercial flying, you might remember the meals served on board: A box lunch containing a sandwich, some cake or fruit and a thermos of coffee.

Today’s airline meals are a far cry from those humble beginnings. The menu is varied, there is always some selection of items, a delicacy is featured frequently and, at the very least, the meals are nourishing and keep you occupied.

Wow, and now if we want that boxed lunch, it comes with a price. The article went on to mention that “every four weeks within the nine-month cycle, the menus are rotated so that the possibility of food boredom on the part of a regular, weekly passenger is alleviated. If that is not enough, the menu on the Newark to Chicago flight, for instance, will always be different from the menu on the Chicago to Newark flight.”

Back in 1974, airlines even took into account regional differences in tastes, noting that “chicken is popular out of Atlanta, but the New Yorker, who fancies himself more sophisticated, prefers the deli sandwich. That in turn is scorned by the San Franciscan, who likes fish, currently one of the most popular items across the country.”

The desserts were prepared by European-trained chefs, and with three-days notice, they would prepare “a special occasion cake (sponge cake) with flower buds and swirls of icing for on-board presentation.” I am speechless!

This article was specifically written about United Airlines, and today, the only way to get a complementary fairly nice meal is to either fly first class or travel overseas. Otherwise, purchase a meal prior to boarding your flight or buy that boxed meal once served in those early days for free.

Those were the days, my friends! 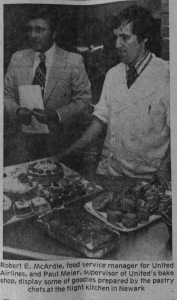 I am a genealogy detective. I have already written one book about my Irish family's journey from 19th century Ireland to the United States- a family history sprinkled with personal anecdotes. My second book was intended to be a similar story about my Russian ancestors. Instead, it turned into a tale of just my father's immediate family. It is the tale of what happens when 6 children from New Jersey are moved to the Soviet Union by their Russian-born parents during the Great Depression. It details who lives, who dies, and who is able to return to NJ during a time when leaving the USSR was not an easy endeavor, particularly during World War II and the Cold War. It is my hope that those interested in history during this time period will find this story fascinating as well as those fellow amateur family historians who will learn some of the tools such as ancestry.com, visits to the National Archives, and local libraries I used to uncover this story.
View all posts by kjw616 →
This entry was posted in Newspapers-1963-2019 and tagged Air Travel, Airline Meals. Bookmark the permalink.