In It to Win It

Merry Christmas Eve everyone! Beginning today, enter my Goodreads Contest to win a copy of “Do Svidanya Dad” and learn the story of what happened when my dad and his family moved to the Soviet Union when he was just a boy. I guess you can say that this is a bucket list item that I finally accomplished. Now, once I have my hip surgery in March, I can consider climbing that rock wall and knock another item off the list. 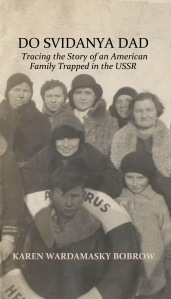 I am a genealogy detective. I have already written one book about my Irish family's journey from 19th century Ireland to the United States- a family history sprinkled with personal anecdotes. My second book was intended to be a similar story about my Russian ancestors. Instead, it turned into a tale of just my father's immediate family. It is the tale of what happens when 6 children from New Jersey are moved to the Soviet Union by their Russian-born parents during the Great Depression. It details who lives, who dies, and who is able to return to NJ during a time when leaving the USSR was not an easy endeavor, particularly during World War II and the Cold War. It is my hope that those interested in history during this time period will find this story fascinating as well as those fellow amateur family historians who will learn some of the tools such as ancestry.com, visits to the National Archives, and local libraries I used to uncover this story.
View all posts by kjw616 →
This entry was posted in My Book and tagged Goodreads Giveaway. Bookmark the permalink.