Today I turned to newspapers.com, where I found two interesting articles. The first is dated July 12, 1945, and is from the Bridgewater, NJ Courier–News. Because I do not have the extended subscription to this service, I am unable to read it, so I am waiting for the assistance from someone on my ancestry.com Facebook group. I am excited to see what turns up, because the piece of the title which I am able to see is “Russian Visit.” Very intriguing! 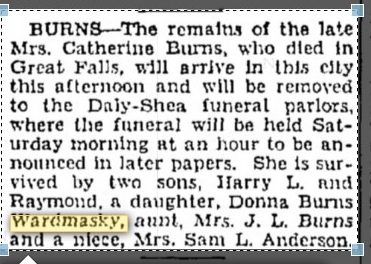 Who the heck was Donna Burns Wardamsky? Trust me, my name is so unusual that I am positive that anyone with that name must be a relative. My only family in the United States were descendants of my father, so now I need to turn to my genealogy skills and figure out who was the mysterious uncle or cousin she married and what happened to him.

I will be taking some time off during the next few weeks while I recover from hip-replacement surgery, which I will having on Monday. There will be lots of time for reading and researching while I am recovering, so the next time I post, I hope to have the answers about “Aunt/Cousin Donna.” I also expect to reveal what was in that 1945 “Russian Visit” news articles.

I am a genealogy detective. I have already written one book about my Irish family's journey from 19th century Ireland to the United States- a family history sprinkled with personal anecdotes. My second book was intended to be a similar story about my Russian ancestors. Instead, it turned into a tale of just my father's immediate family. It is the tale of what happens when 6 children from New Jersey are moved to the Soviet Union by their Russian-born parents during the Great Depression. It details who lives, who dies, and who is able to return to NJ during a time when leaving the USSR was not an easy endeavor, particularly during World War II and the Cold War. It is my hope that those interested in history during this time period will find this story fascinating as well as those fellow amateur family historians who will learn some of the tools such as ancestry.com, visits to the National Archives, and local libraries I used to uncover this story.
View all posts by kjw616 →
This entry was posted in Genealogy Research Tips and tagged Genealogy Research, Google, newspapers.com. Bookmark the permalink.

2 Responses to Turning to Google