Last week I wrote a tongue-in-cheek post regarding my belief that Americans may want to consider learning to speak the Russian language—at least a few basic words and phrases. This thought was based upon the news of Russia spies infiltrating the United States. I thought I was done with this topic until today, when I turned to some research on my husband’s family.

I learned that his Russian-born uncle was a teacher of the Russian language. The news article I stumbled upon was from a newspaper in Kingston, New York in 1958. Relations were tense between our nation and the Soviet Union. We were in the midst of the Cold War, so I should not have been surprised to read that “study is being encouraged by the federal government” and “two national television programs now carry instruction in Russian.” 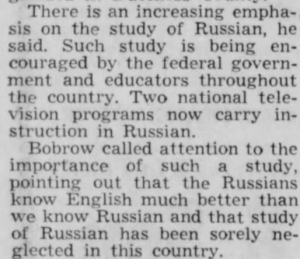 Then the Cold War ended, so I wondered what happened to Russian-language studies here at that time. I found an article in the New York Times published in 1992 which stated that the need shifted away from Russian to Arabic. After the invasion of Kuwait by Iraqi forces, it was discovered that there were only eighteen out of three million active-duty soldiers who were fluent in Arabic. Now Arabic classes were what the cool kids on campuses were studying rather than Russian.

Interest in learning Russian has resurged during the past few years, so I guess my post was more accurate than I thought. I guess when kids are choosing their foreign language classes in high school and college, they should let current events help drive their decision.

I am a genealogy detective. I have already written one book about my Irish family's journey from 19th century Ireland to the United States- a family history sprinkled with personal anecdotes. My second book was intended to be a similar story about my Russian ancestors. Instead, it turned into a tale of just my father's immediate family. It is the tale of what happens when 6 children from New Jersey are moved to the Soviet Union by their Russian-born parents during the Great Depression. It details who lives, who dies, and who is able to return to NJ during a time when leaving the USSR was not an easy endeavor, particularly during World War II and the Cold War. It is my hope that those interested in history during this time period will find this story fascinating as well as those fellow amateur family historians who will learn some of the tools such as ancestry.com, visits to the National Archives, and local libraries I used to uncover this story.
View all posts by kjw616 →
This entry was posted in Uncategorized and tagged language studies, Russian. Bookmark the permalink.