A Relevant Prize for Me

I am reading a book which I won on a Goodreads Giveaway. (This may be my first win ever.) I had every intention on buying the book, since it was written by the author of quite possibly my all-time favorite book—The Nightingale, by Kristen Hannah.

Since I enjoyed that book so much I decided to see what else Ms. Hannah had written and was drawn to one of her earlier books—Winter Garden. When I noticed that part of the book was set in Leningrad, well, you can understand why I was intrigued. So I put it on my shelf with every intention of purchasing it, but then I won it instead.

It’s been sitting in my room just waiting for me to have the time to sit down and turn that first page. Now I wish I hadn’t waited so long, because that book has given me some insight into what life in Leningrad was like during the Second World War.

I read about people riding those evacuation trains, just like my father’s family did so many years ago, as German planes dropped their bombs from overhead. As I turned each page, I imagined what it must have been like as my grandparents and aunts huddled together on those unheated boxcars, trying to keep warm during the most brutal winter of the 20th century.

I am sure there were many times when they wondered how they would die, not if they would survive. How would they meet their demise? Would they die from the bombs, lack of food, or would they slowly freeze to death.

What I was not aware from my own research was that many of the evacuees were children, who were traveling on some of those trains without a mother or father. Thinking back on my own children, I cannot imagine what it must have been like for those mothers to send their little ones off, knowing that they may never see them again. So as bad as it must have been for my father’s family, at least they had each other.

Without going into further detail so as not to spoil the story, I would highly recommend checking out Winter Garden. You won’t be sorry.

Incidentally, it’s been a year since my book was pubished, so I have decided it is time for me to do another Goodread’s Giveaway. Stay tuned for details. It will begin next week. 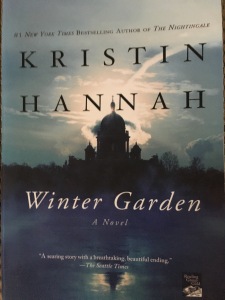 I am a genealogy detective. I have already written one book about my Irish family's journey from 19th century Ireland to the United States- a family history sprinkled with personal anecdotes. My second book was intended to be a similar story about my Russian ancestors. Instead, it turned into a tale of just my father's immediate family. It is the tale of what happens when 6 children from New Jersey are moved to the Soviet Union by their Russian-born parents during the Great Depression. It details who lives, who dies, and who is able to return to NJ during a time when leaving the USSR was not an easy endeavor, particularly during World War II and the Cold War. It is my hope that those interested in history during this time period will find this story fascinating as well as those fellow amateur family historians who will learn some of the tools such as ancestry.com, visits to the National Archives, and local libraries I used to uncover this story.
View all posts by kjw616 →
This entry was posted in Miscellaneous Ramblings and tagged Goodreads Giveaway, Kristen Hannah, Winter Garden. Bookmark the permalink.