My recent trip to Washington, DC was like attending an international food festival. My husband and I began in Korea, and by the end of the weekend, we had visited eateries representing Venezuela, China, the Middle East, and Russia. Looking back on our choices, those all represented hot spots in the news of late, but that was not intentional.

I was most excited to dine at the Russian restaurant—conveniently located less than a mile from the White House and one block from the famous Mayflower Hotel. (I encourage you to Google “Mayflower Hotel Russians” and you’ll see what I mean.) 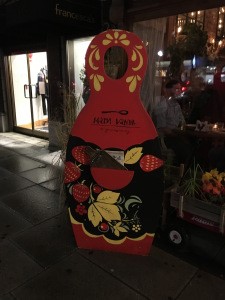 You would think the fact that my father had lived in Russia for ten years would have made me familiar with the cuisine of his people, but that was not the case at all. The only time I ever went to a Russian restaurant was when we accompanied Dad and his cousin, Misha, to a restaurant in New York City, where I believe I feasted on Chicken Kiev and mashed potatoes.  I ordered the same for old times’ sake.

I always have a glass of wine with dinner, but it I felt it would be wrong not to order some sort of vodka-based drink in a Russian restaurant. I ordered a strawberry-infused vodka cocktail. Delicious!

Within seconds of opening my menu, a wave of emotion swept over me and I began to cry. I don’t know why, but after spending so much time writing my book about my father’s years living in the USSR, being in a place I knew he would have loved just caused those tear ducts to open and begin to flow.

There were plenty of Russian-speaking patrons slurping their borscht and sipping vodka, and the bar was showing Russian cartoons. It was cozy, and the bathroom was decorated with Russian newspapers, which added to the ambience.

While my meal was not my favorite on our food tour around the world, the atmosphere affected my soul the most.

I am a genealogy detective. I have already written one book about my Irish family's journey from 19th century Ireland to the United States- a family history sprinkled with personal anecdotes. My second book was intended to be a similar story about my Russian ancestors. Instead, it turned into a tale of just my father's immediate family. It is the tale of what happens when 6 children from New Jersey are moved to the Soviet Union by their Russian-born parents during the Great Depression. It details who lives, who dies, and who is able to return to NJ during a time when leaving the USSR was not an easy endeavor, particularly during World War II and the Cold War. It is my hope that those interested in history during this time period will find this story fascinating as well as those fellow amateur family historians who will learn some of the tools such as ancestry.com, visits to the National Archives, and local libraries I used to uncover this story.
View all posts by kjw616 →
This entry was posted in Miscellaneous Ramblings and tagged International cuisine. Bookmark the permalink.