In honor of New Year’s Day, I decided to give away my new-and-improved book for a two-day period. I had done something similar twice before, although I had never done so for free. There was a huge difference in the outcome, so the question is, was it because people will take anything for free (but not for 99 cents), or was the title and cover more appealing?

My husband, who suggested eliminating the confusing “Do Svidanya” from the name and changing “USSR” to “Russia” in order to take advantage of the constant Russia news, was walking around the house with a big I-told-you-so smirk on his face. I pointed out that, while he may be correct, he was silent when I chose the original name.

During my 99 cent sale, I sold a whopping eight books, yet when I offered the book for free, 296 copies were downloaded. So was it the revamped title and cover or do people just like to grab free stuff? 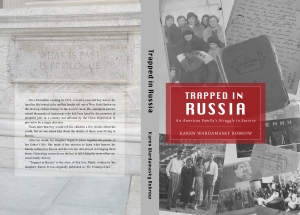 I am a genealogy detective. I have already written one book about my Irish family's journey from 19th century Ireland to the United States- a family history sprinkled with personal anecdotes. My second book was intended to be a similar story about my Russian ancestors. Instead, it turned into a tale of just my father's immediate family. It is the tale of what happens when 6 children from New Jersey are moved to the Soviet Union by their Russian-born parents during the Great Depression. It details who lives, who dies, and who is able to return to NJ during a time when leaving the USSR was not an easy endeavor, particularly during World War II and the Cold War. It is my hope that those interested in history during this time period will find this story fascinating as well as those fellow amateur family historians who will learn some of the tools such as ancestry.com, visits to the National Archives, and local libraries I used to uncover this story.
View all posts by kjw616 →
This entry was posted in My Book. Bookmark the permalink.